Your voucher's on its way.
Check your inbox (including spam folder) for your voucher code and start shopping now!
Great to have you back!
Check your inbox for trend updates and exclusive sales coming your way!
(The Php 350 voucher applies to first-time subscribers only.)
Looks like you're already subscribed.
Close
Get Php 350 off
your next order!
Enter your email for ZALORA news and deals
For first-time subscribers only
ZNOW: Unlimited Free Shipping
Days Free Returns
Free Shipping Available

taking flight
Ateneo Blue Eagles, Thirdy Ravena and Trina Guytingco, take us on their wings before they fly off to new territories. “It’s something I couldn’t avoid wherever I was, and I couldn’t run away from it. I couldn’t hide from basketball.” - Thirdy A lot may not know this about Thirdy, but baseball was actually the three-time UAAP Finals MVP’s first sport as a kid. It was short-lived though, because due to health reasons, young Thirdy had to pass on any sport that required him to stay under the sun for an extended period—that, and because destiny had a different plan for him. Basketball—a sport that was pretty much embedded in his DNA. “I basically grew up around the sport. I’d go home talking about basketball, or watching my dad or my brother’s games—it’s something I couldn’t avoid wherever I was, and I couldn’t run away from it. I couldn’t hide from basketball.”

They say that stars are born, but Thirdy has proven that they can be made with heart and lots of hard work.

“I started loving the grind. That’s when I started the discipline and fell in love with working hard, because I knew that it would get me somewhere.” - Thirdy In his first playing year for the Ateneo Blue Eaglets, he was ranked 106th out of 120 players in the individual statistics of the UAAP Juniors “I made it to the team, but I was averaging more turnovers than minutes inside the court.” The numbers served as a wake-up call and fired up Thirdy’s competitive spirit. “I worked my butt off every single day that summer. I’d join the pick-up game every day in our village, sleep for a bit, have breakfast, and leave for practice with the Juniors team from noon to 6pm.” His hard work didn’t go to unrewarded, because his ranking jumped from 106th to an impressive second, the very next season! “That’s when I started loving the grind. That’s when I started the discipline and fell in love with working hard, because I knew that it would get me somewhere.”

“I had a gut feeling that something was pulling me to go to the Philippines.” - Trina Trina’s Ateneo story also began in one summer. From learning how to shoot hoops with her dad on the street in front of their house in Pleasant Hill, California, choosing basketball over track and field, to that one fateful summer in the PH, the stars led Trina to Katipunan. She was in Manila for vacation when her cousin made her try-out for the Ateneo Women’s Basketball team, “I guess I made a really good impression on them because two months later, they got back to me asking if I was interested to play for Ateneo, and that they were going to give me a scholarship.” Although admittedly, Trina shares that her move to Manila was very, very impulsive. Her dad was all for it, but her mom was adamant about her moving so far away. Trina’s answer was simple: ‘You know Mom, I had a gut feeling that something was pulling me to go to the Philippines.’ So for me, I was like, ‘Okay, why not? It’s a big understatement to say that it was a good year for the Blue Eagles, especially for the 6-foot-2 forward who just ended his collegiate career with flying colors. Successfully leading his team to a historic clean sweep, a 3-peat title to go with it; not to mention, being the first and only three-time Finals MVP in the history of the UAAP Men’s Basketball, Thirdy tells us that it still feels surreal, “You kind of think that getting a championship for the third time would more or less make you get used to the feeling, but honestly, it’s just like the first time every single time. People might think that the 16-0 sweep would come in easy, but the road was everything but smooth. What we had though, was love for each other. It wasn’t about playing individually—it was playing for one another. It takes a lot of heart and a lot of love to create a system like that.”

When asked if he still gets nervous before stepping onto the court, especially for such big games, Thirdy says “Definitely. But as soon as I step inside that court, all the nervousness goes away. I mean, it’s still there, but I guess you just have to get over the nerves, and also accept the fact the it’s just another basketball game.” Imbued with a true champion’s mentality, he treats each game with equal importance and puts all his attention on the task at hand instead of the hype, the crowd, and all the social media noise.

“This is my passion, this is what I grew up doing, and this is what helped me mold the person I am today.” - Trina Playing a male-dominated sport in a country that’s obsessed with the game is no walk in the park. But for Trina, the struggles only made her love the game more. She can’t even count the number of times she’s been asked why she’s not playing volleyball instead or get remarks like, ‘Wow, you play basketball? “One time, I was riding a trike on my way to school and the kuya asked if I was a volleyball player, and I said, ‘No, I play basketball,’ and he was like, ‘Oh, I didn’t know Ateneo had basketball for women.’ In my head I was like, ‘What’s wrong with that?’ I don’t like it when people ask me that question, like I have to explain myself. This is my passion, this is what I grew up doing, and this is what helped me mold the person I am today.”

At the end of the day, Trina is thankful to have a great support system within the Women’s Basketball community, “The people that I’m surrounded with, they’re really, really supportive. They knew that, obviously, women’s basketball wasn’t getting the support that we wanted, but the people around us continue to motivate and inspire us, and they are just there for us knowing that we were all in the same position, too.” 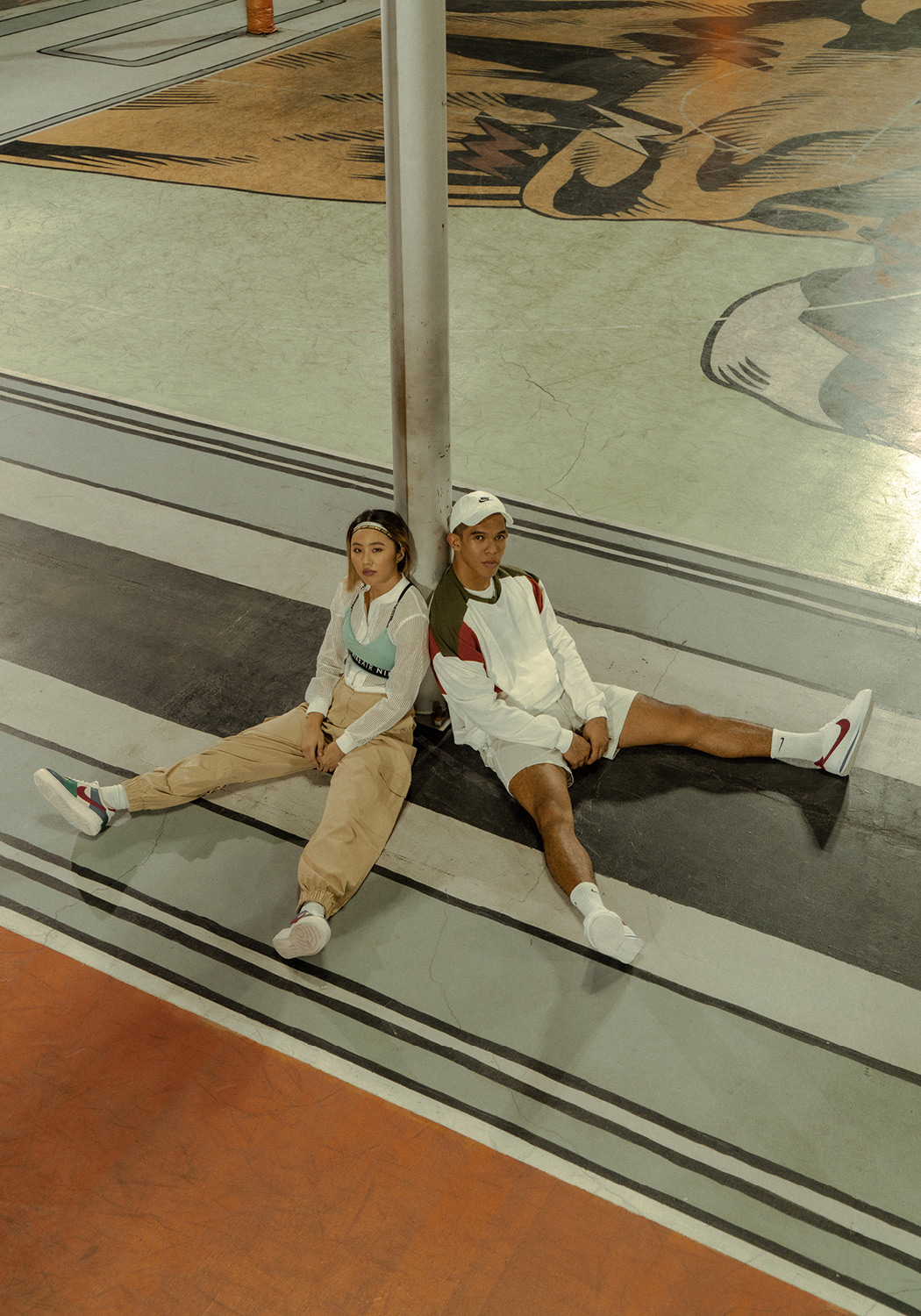 Shop the look >
Off Court

Off court, Trina stands out because she’s not just another pretty face. She has this likeable aura and a genuine smile that will draw you in, but she’s also a tough chick who knows how to hustle with a ball, and charm with her voice. In case you did not know, this Cali girl doesn’t only have a ‘do similar to that of Dua Lipa’s, she also gifted with quite the singing chops to back it up. Passionate about music just as much as she loves basketball, Trina plays the guitar, is masterful on the keyboards, and has a mesmerizing voice worthy of her own singles. “I love playing instruments, singing, and then recently, I’ve been focusing more on making music, like music production—it’s something I’m still learning; and I really enjoy doing that.” A complete package indeed, check out her Instagram and allow her to wow you with her countless covers as well as seriously sick originals. Aside from being vicous on the court, Thirdy is also known for having an unapologetic and distinct personal style. “Honestly, it’s just who I am—it’s very moody. I could go from being very cozy and comfortable, to very loud and sartorial just like that. It’s very different, and it’s very random. I don’t usually pick my outfits, it just depends on my mood, ‘It’s like, oh, I’m feeling like wearing a hoodie today, or I feel like looking like a businessman (laughs).” 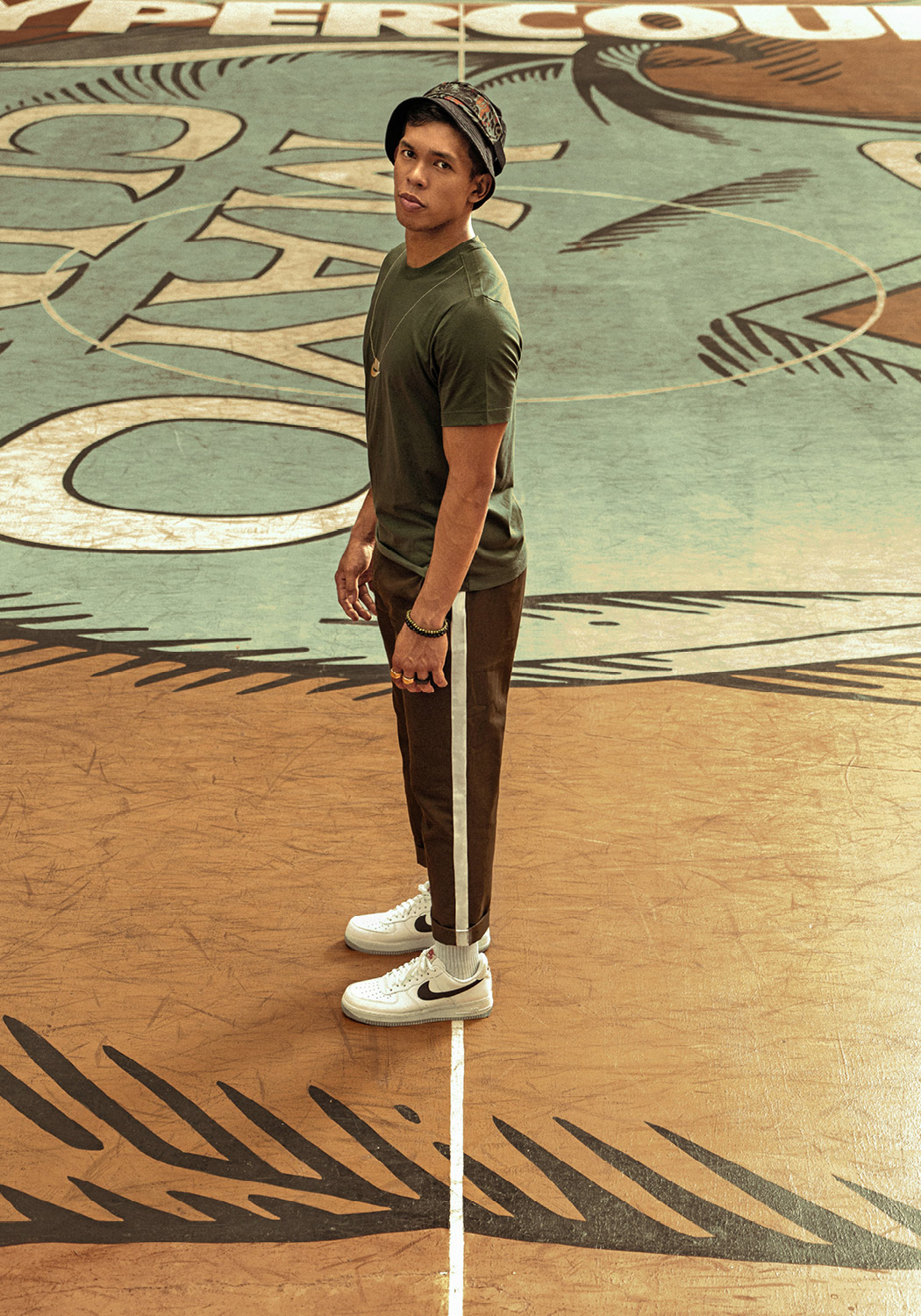 Meanwhile, if you’ve caught the Filipina baller on Instagram, you would know that she’s not your typical girly-girl. “I’m not super girly, so I kind of incorporate tomboy-ish pieces into my outfits. I could be wearing a cropped top, but I love wearing sweats, sneakers, and Jordans. Basically, just being comfortable, and being my Trina swag.” 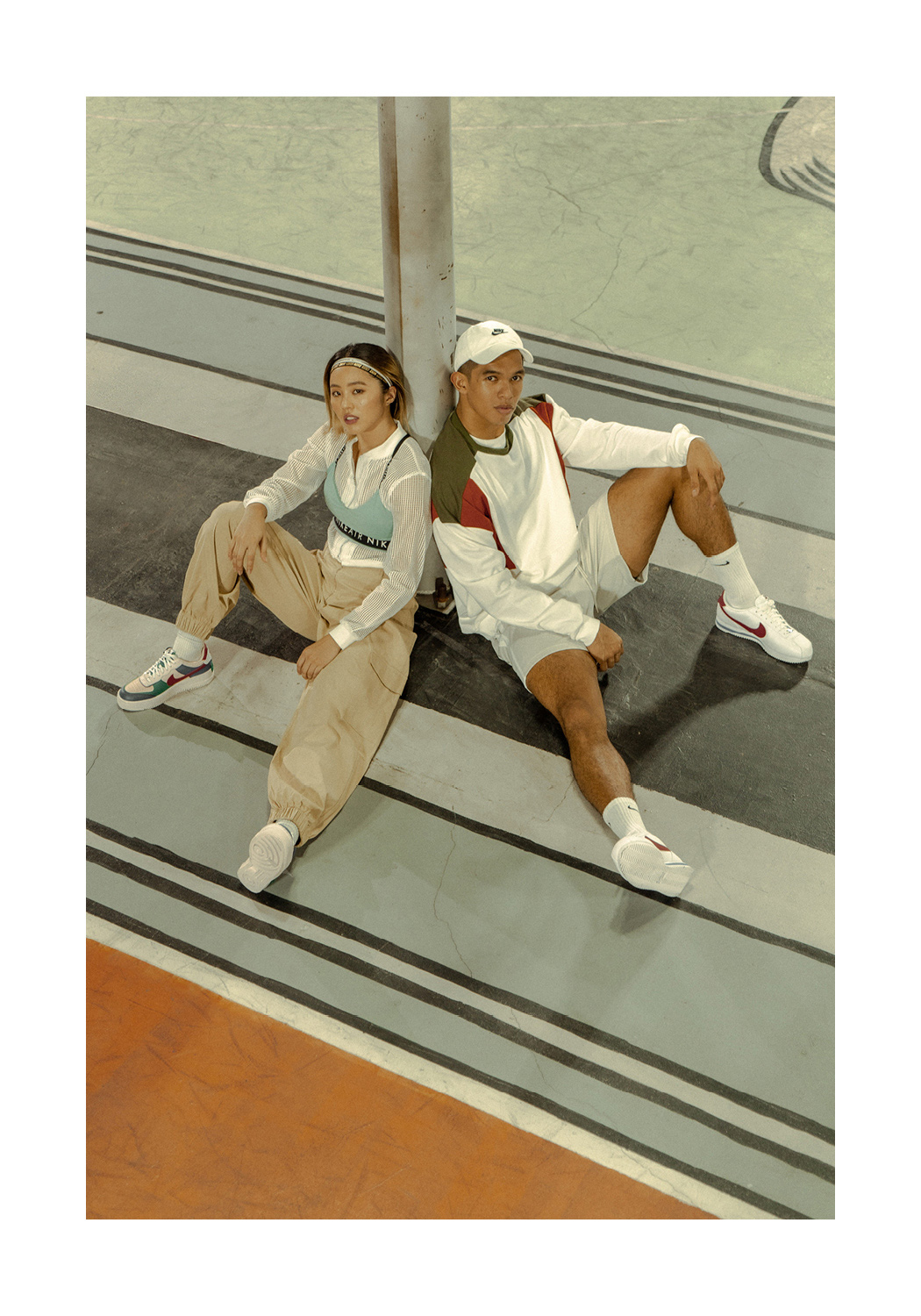 Shop the look >
Down from the Hill

It’s been a great run for the two as they leave Loyola high and proud with memories to keep for a lifetime. But now all eyes are on them waiting to see where they’ll go next.

Trina admits that there are still a lot of possibilities to consider, “I’m open to staying in Manila, but I’m also open to going back home. I’m thinking that maybe it’s time to open a new chapter of my life since I’ve been playing basketball for 12 years already; but also, I get a little bit of anxiety thinking that I’m not going to be playing basketball—I’m going to be an adult without a job (laughs). But I hope I’ll be able to find a job soon or find something that I enjoy doing.” With an impressive resume, the three-peat King is everyone’s top bet for the PBA Rookie draft, but he has yet to decide on his plans. “Well right now, we’re still talking. No final decision yet, but the deadline for the PBA draft is soon. I just hope that people will still support me wherever I go. We’ll see.”

As of November 29, 2019, Thirdy has decided to skip this year’s PBA Rookie Draft to focus on personal training and self-improvement in the next few months.